Check out my writing on Her Story Arc! In Belle, Dido just wants to lead the normal life of an upper class Englishwoman, but her mixed race heritage stands in her way. Eventually, she starts to draw parallels between the forms of oppression in her world. Read the whole review in “Forget Pride and Prejudice, Watch Belle.”

Check out my writing on Her Story Arc! Are you a fan of Internet activism? What works and what doesn’t? Read my article, Slacktivism and the Male Feminist, and then leave a comment!

Check out my writing at Her Story Arc! To learn more about feminism in other countries, I interviewed HSA’s German contributor, Johanna. Find out what she had to say in our article, Feminism Around the World: German Edition.

Check out my writing on Her Story Arc! In “No Perfect Face,” I discuss how face melds and “the perfect skin color” create ridiculous standards to live up to.

Check out my writing on Her Story Arc! Read about representations of women in art on Pinterest in “Pinterest and the Fairer Sex.” Then check out my awesome Pinterest board, Women in Science Fiction and Fantasy.

The title to this sounds like an instructional, but I’m really asking a question.

I’ve seen character and novel boards on Pinterest from a lot of other authors, and thought it was a cool idea at first. That’s why I decided to make my own. I have two Pinterest boards just for my novels, TURQUOISEBLOOD and DANA (here’s DANA below for reference).

Let’s use TURQUOISEBLOOD as an example. The novel takes place in the mountain country of Rak, where an albino village girl named Kiri takes up with the rogue dragon Anya to solve a murder. Their journey takes them to Rak’s lowlands, royal court, and deep into the mountains. At the same time, we learn the story of Pristina, fighting to stop a civil war in Rak 200 years before Kiri’s birth.

Because of this, my Pinterest board has pins of mountains, dragons, white-haired girls, and lots of clothing. But it suggests nothing of the narrative of the story, that there’s a mystery, a parallel storyline, or even other characters. Because of the changing fashion in the areas Kiri and Anya travel to, the clothing styles don’t have any consistency to anyone but me.

These two boards don’t have many followers. Likewise, I find myself less interested in other writer’s story/character boards. If I haven’t read the book, or if it’s unpublished (TURQUOISEBLOOD will be out in 2015!) then it’s harder for me to enjoy these kinds of boards.

In order to improve mine (New Year’s Resolution time?), I’m going to try out some new things:

1) Create a better narrative by writing more description in the header and on the pins.

2) Reshuffle pins so they more closely follow events of the novel.

3) Find more ways to pin to these boards. After all, the more you pin the more followers you get!

What about you? Has anyone seen an example of a good story-Pinterest board? Let me know what you’ve seen/done before! And send me your name so I can follow you on Pinterest 🙂

“Welcome to Minnesota, where aliens go ice fishing, angels roam the streets of Minneapolis, and missing socks show up on a distant planet.”

News! (a little overdue, but…)

The review blog AmazingStoriesMag.com has reviewed our forthcoming anthology, Twin Cities Speculations! An anthology of all Minnesota authors, the review specifically highlights Eric Binfet, Lindsey Loree of HerStoryArc.com, and yours truly. Read it here!

Twin Cities Speculations is at the publisher’s now, so stay tuned for more info and my own story, which will be posted on my site soon! 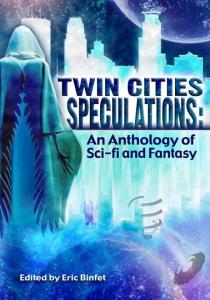 “In Minnesota, there’s a lot of time during the six-month-long winter for creativity. The folks who wrote the stories in Twin Cities Speculations have dump trucks full of it. From ice fishing through an alien’s eyes to an alien fighting Ripley-style to save her race, to a grieving mother trying to save a strange child during an icy northern winter, you’ll find great entertainment here.”

I just read a really good article by Neil Gaiman and I agreed with almost every single point, except his last sentence. The article, posted on his website in 2009, is about how writers who take a long time to finish series (he used George R.R. Martin and Patrick Rothfuss as examples) have a right to work at their own pace:

You’re complaining about George doing other things than writing the books you want to read as if your buying the first book in the series was a contract with him: that you would pay over your ten dollars, and George for his part would spend every waking hour until the series was done, writing the rest of the books for you.

No such contract existed.

I was nodding along enthusiastically at Gaiman’s points about writers not being machines who can produce on-demand, and how “life is a good thing for a writer” until I was brought up short by this sentence, which is, you guessed it, GRRM does not work for you.

He doesn’t? I thought. But, then, who does he work for?

I’m not a huge fan of either Martin or Rothfuss. My struggle is with Isobelle Carmody, Australian author of the Obernewtyn Chronicles. The first book in the series was published in 1988, the last has yet to appear. I didn’t even start reading them until 2006ish. Imagine the poor people who have loved and followed Carmody since the beginning!

See how it says 2012? Yeah, you still can’t get those last two books

Why do we keep reading these series? Obviously because we love the worlds and become invested in the characters, blah blah blah. The real issue for me (and not for Gaiman) is the money. Technically, Carmody and others work for themselves and the deadlines their publishers give them. But who do the publishers work for? We, the readers–the actual book-buyers who could’ve spent that money on something else–are the ones actually funding the lives of these authors. If GRRM doesn’t work for me, then fine, but he can’t have my money.

When you write a novel, that’s art, and you can take 500 years to finish it if you want. But when you PUBLISH a novel, that’s a business contract, and I don’t think it’s unreasonable to expect the next book to come out within ten years. Your  loyal customers deserve it.