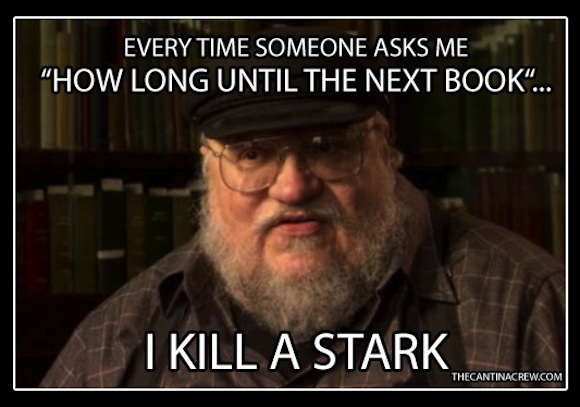 I just read a really good article by Neil Gaiman and I agreed with almost every single point, except his last sentence. The article, posted on his website in 2009, is about how writers who take a long time to finish series (he used George R.R. Martin and Patrick Rothfuss as examples) have a right to work at their own pace:

You’re complaining about George doing other things than writing the books you want to read as if your buying the first book in the series was a contract with him: that you would pay over your ten dollars, and George for his part would spend every waking hour until the series was done, writing the rest of the books for you.

No such contract existed.

I was nodding along enthusiastically at Gaiman’s points about writers not being machines who can produce on-demand, and how “life is a good thing for a writer” until I was brought up short by this sentence, which is, you guessed it, GRRM does not work for you.

He doesn’t? I thought. But, then, who does he work for?

I’m not a huge fan of either Martin or Rothfuss. My struggle is with Isobelle Carmody, Australian author of the Obernewtyn Chronicles. The first book in the series was published in 1988, the last has yet to appear. I didn’t even start reading them until 2006ish. Imagine the poor people who have loved and followed Carmody since the beginning!

See how it says 2012? Yeah, you still can’t get those last two books

Why do we keep reading these series? Obviously because we love the worlds and become invested in the characters, blah blah blah. The real issue for me (and not for Gaiman) is the money. Technically, Carmody and others work for themselves and the deadlines their publishers give them. But who do the publishers work for? We, the readers–the actual book-buyers who could’ve spent that money on something else–are the ones actually funding the lives of these authors. If GRRM doesn’t work for me, then fine, but he can’t have my money.

When you write a novel, that’s art, and you can take 500 years to finish it if you want. But when you PUBLISH a novel, that’s a business contract, and I don’t think it’s unreasonable to expect the next book to come out within ten years. Your  loyal customers deserve it.